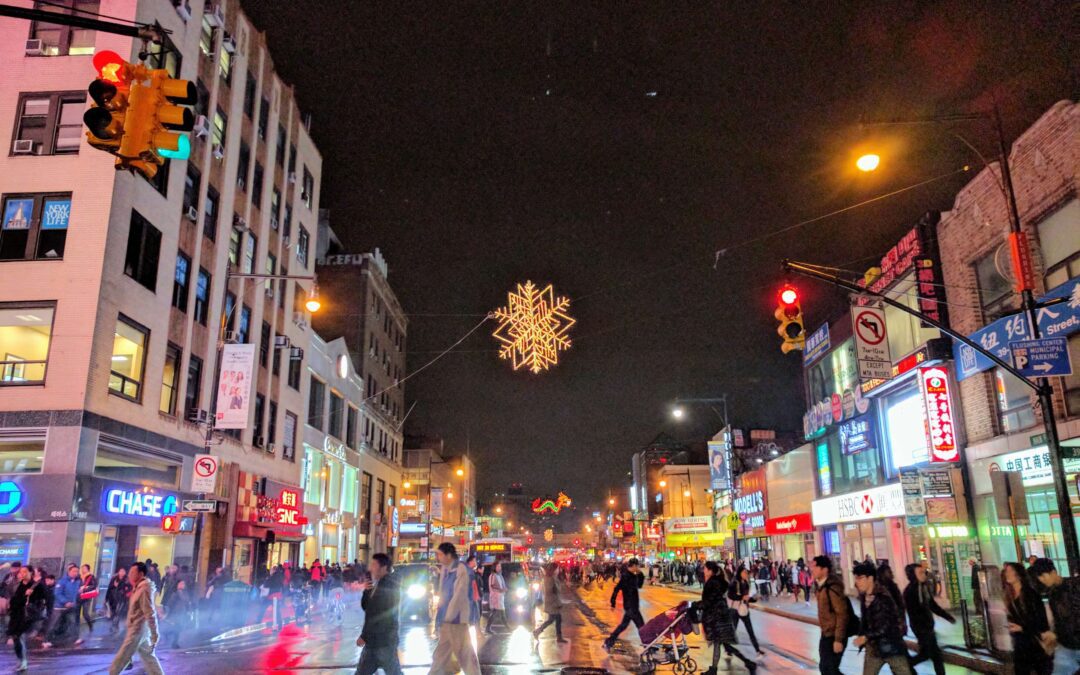 Quick Fact: Flushing is the most diverse & dynamic community in the United States

Two-thirds of Flushing’s population is Asian American, including residents with roots in China, Singapore, Malaysia, Vietnam, Taiwan, India and Afghanistan. That alone accounts for Flushing’s vibrancy and also for its neighborhood vibe—many of the businesses here are family owned, running multiple generations deep. As Christina Seid, owner of Flushing Ice Cream Factory, puts it, “[Flushing] is like Sesame Street—you walk down the street and you know everybody.”

Show love and support for Asian American and Pacific Islander owned businesses by picking up a Boston cream pie from Yeh’s, trying wontons at White Bear and browsing books at Xinhua. Check out the itinerary below, then head to our list of organizations and resources for more ideas of how to support NYC’s Asian community.

Critics have been singing the praises of chef Helen You’s dumplings for years—but she’s been making dumplings all her life. Despite the accolades, including You’s nomination for the James Beard Award, dumplings at Tian Jin are still affordable, like 10 for $8 affordable. With all the different filling combinations, you’re going to be thankful for the prices. Try preserved egg with pine nuts, lamb with green squash, chicken and broccoli and a seemingly infinite number of other savory combinations.

You might be familiar with the long-standing yellow awning emblazoned with a green dragon of The Original Chinatown Ice Cream Factory on Bayard Street in Manhattan’s Chinatown. A neon version of this same dragon can be found presiding over the counter at the Flushing Ice Cream Factory. The original Chinatown location was opened by Philip Seid in 1978, and now, decades later, Seid’s co-owner and daughter Christina runs the Flushing outpost. Their Instagram-worthy scoops, with mouthwatering flavors like Don Tot (creamy Chinese egg custard), lychee and red bean can be garnished with gummy bears and placed into a colorful cone. And you know the flavors are authentic—Seid visits the local farmers’ market to procure the fruits that flavor batches of ice cream. The family runs a third storefront on the Lower East Side

Tucked inside of a florist shop and pharmacy, this Chinese bookstore carries illustrated calligraphy books and prints, as well as gifts, reflexology posters and, of course, Chinese literature. Browse while you wait for a prescription or a floral arrangement—whether you’re learning Chinese, are fluent or just a spectator, there is plenty to peruse and admire.

Flushing is all about small bites with big bursts of flavor—case in point, the standout White Bear, a must-stop for anyone serious about food. This intimate eatery is rumored to have the best wontons in NYC—they even offer frozen ones to go so you can stock up on vegetable- or pork-filled goodness. Now open only for takeout (with curbside pickup), they have a vast menu, but for locals the popular choice is Number 6, which comes with 12 handmade pork wontons in chili oil, garnished with pickled vegetables.

Lauded by locals, this mom-and-pop shop is the perfect place to get a birthday cake for any occasion or smaller pastries to go. They’re mostly known for the Boston cream pie, which is light, airy and not too sweet, as well as their fluffy green-tea cake. Fruit cakes can be personalized for special occasions. They offer a few savory options as well, like curry beef pastries. Call ahead to place your order, especially for cakes and pies

Look for the stainless-steel globe, aka the Unisphere, in Flushing Meadows Corona Park, the site of two 20th-century world’s fairs, and you’ll be headed in the direction of the Queens Museum. The building of the museum itself was constructed for the 1939 World’s Fair to house the New York City Pavilion. Designed by Aymar Embury III, the architect of the Central Park Zoo and the Triborough Bridge (now the Robert F. Kennedy Bridge), the building was once a recreational center for Flushing Meadows Corona Park and housed a roller rink. In 1972 it became the art museum it is today, carrying on the building’s history of serving the community of Queens with educational programs, exhibits and events. Currently on display is the Neustadt Collection of Tiffany Glass and an exhibition called From Watersheds to Faucets: The Marvel of the NYC Water Supply System. Through August 22, the museum is hosting Strange But True, an installation by multimedia artist Sydney Shen exploring photography, evidence and notions of truth.

On long-term view at the museum is the Panorama of the City of New York, conceived by Robert Moses for the 1964 World’s Fair. The panorama was one of the most popular attractions at the fair. It is a scale model comprising 895,000 New York City buildings, with streets, parks and bridges, and took more than 100 people to construct.

Another long-lasting outcome of the 1939 World’s Fair, the Queens Botanical Garden, which grew—literally—out of a five-acre garden exhibit, is now located at the northeast corner of Flushing Meadows Corona Park with an entrance on Main Street. Art is on display in gallery spaces and throughout the gardens.

Offer Available: Buy One Admission, Get One Free

The faded, multicolored signage above Alumni shoe store reads “Tuxedos, Costumes”—and the fact that the new occupants chose to preserve the lettering speaks to their love for their hometown. Owned by longtime Queens local and public figure Jaeki Cho, the boutique shoe shop carries brands like Adidas, Dr. Martens and Nike, plus a number of streetwear brands, giving a chance for locals to get their hands on the latest styles without leaving the neighborhood. The shop also hosts a runners’ meetup and highlights local figures and activists on their Instagram page.

This is not your ordinary town hall. Though the ornate building (its German Rundbogenstil—“round arch style”—architecture was popular in America during the Civil War era) is currently closed to visitors, it features a 308-seat theater as well as a gallery, classroom and rehearsal space. Run by the Flushing Council on Culture and the Arts (FCCA), they have online programming now through June 2021, including live demonstrations and lessons in traditional Chinese and Korean dance, kimono culture, Chinese folk music and Chinese folktales.

This authentic Korean barbecue spot is all about the beef, from marinated ribs to bulgogi to brisket. They also serve traditional cold noodle dishes like mool naeng myun (vermicelli noodles in cold beef broth) and hot soups and stews like kimchijigae (kimchi stew with pork and tofu). They’re especially known for the freshness of their ingredients.

Housed in a Hindu temple in Flushing, the kitchen at Temple Canteen prepares the temple’s naivedyam (Sanskrit for “offering to god”), but it also serves the wider community of Queens and caters local weddings and events. Visited by the late great chef Anthony Bourdain, Temple Canteen has a menu with hundreds of (strictly) vegetarian dishes, as well as sweets and snacks. Expect traditional South Asian cuisine, like dosas, masala dishes and samosas.

Home to over 25 mostly Asian retailers, including the J-Mart Supermarket that takes up two entire floors, New World Mall is a community staple. Shop for apparel, home decor and electronics, or dine at one of the 28 Northeast and Southeast Asian eateries in the food court (just remember not to linger—get your meal to go).

The Greater Flushing Chamber of Commerce is a resource and membership association fostering economic opportunities for the Flushing community through advocacy, networking, innovative markets, business expos, regional campaigns and more.